2 faces of the same Titan 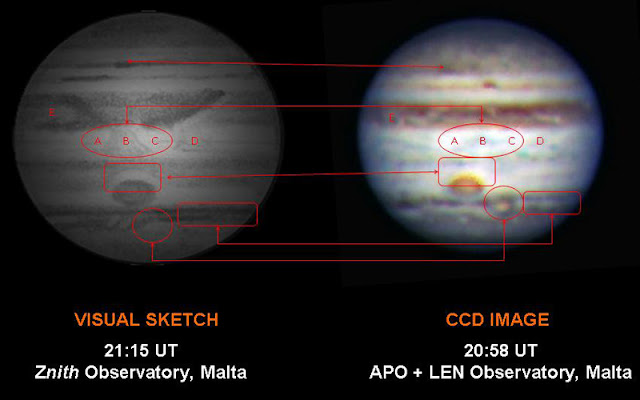 On September 29th at 21:15UT I have produced a sketch (top left) of Jupiter showing the GRS next to the central meridian. Check out here for more interesting details about this sketch.

Surprisingly, the following day Leonard Ellul Mercer from Attard, Malta has kindly emailed me a CCD image of Jupiter taken close to my observation. Leonard used a Celestron 8" SCT with a DMK ccd (mono with filter wheel) + 3x Barlow lens. It is an RGB image with 40 sec. avi. for each coloured channel at 30 frames/sec. Stacked and partly sharpened with Registax 5 and processed with PhotoShop CS.


In spite of the poor seeing, I think that both of us were getting the maximum out of our instruments (both Celestron 8"). The details such as festoons and white plumes in the equatorial zone, the location and size of GRS Jnr (which you have pointed out in your message), a more visible SEB, and prominent halo around the GRS, all complement each other proportionally in both representations.

He commented that "one interesting feature is the turbulance under the GRS, which looks like a small GRS...which has moved considerably to the right side, from the time of my image taken on the 17th. Sept".