The fading of SEB: before & after 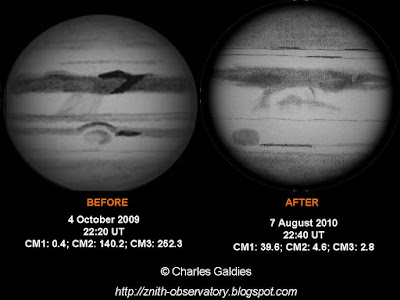 This disappearance is a very curious occurrence and observations show that this phenomenon repeats itself. A sketch of my observation on August 7, 2010 evidently shows the missing southern equatorial belt (SEB) which is usually seen interacting with the great red spot (GRS). This is the first time I observed the fading of a major Jupiter belt.

I find the curvature of this belt next to the GRS as a very intriguing subject to sketch at the limit of optimal seeing conditions as well as optical resolution. Alternatively one can now focus attention on the equatorial zone and North Equatorial Band for some interesting disturbances.

The sketch I made last October shows the contrasting SEB, which according to NASA, started to fade late last year. From my observations it seems that the SEB has almost completely disappeared from view except from a remnant streak towards the equator.

The latest fading of the SEB occurred in 2007, and its return can be quite dramatic for planetary enthusiasts. Localised outbursts of storms and vortices are expected to begin prior to its reappearance, which may occur over the space of just a week or so.

This definitely merits continuous observation of this ammoniacal gas giant.

This observation was uploaded on ALPO's website @
http://www.arksky.org/alpo/alpoimg/Jup13F92F8E.jpg
Posted by Dr Charles Galdies on Saturday, August 14, 2010