I sketched the above 'time lapse' images with around 1 hour difference on October 4th, 2009. Most interesting is the North Equatorial Belt showing contrasting areas that change from one time step to another. The change in position of the great red spot (GRS) in a time span of one hour shown in the last two images indicates the rapid rotation of the gaseous clouds at the latitude of the south temporal belt.

8" to 10" reflecting telescopes show interesting complex surface patterns that are indicative of the rapid rotation of planet Jupiter. These band features correspond to gaseous clouds in its atmosphere. The rotational period is around 10 hours, but this varies with latitude. 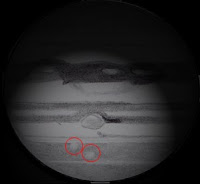