Monitoring a dwarf nova in Cygnus

Dwarf novae are associated with a special type of interacting binary stars known as cataclysmic binaries. Here the secondary star, which is in close orbit with a white dwarf primary, looses its mass to the primary.

These cataclysmic binaries are very small systems, and often the dimensions are comparable with the diameter of our sun.

The outburst that can be seen from our telescopes are generated by thermonuclear runaway reactions at the surface of the white dwarf, following long periods of accretion from the secondary star.

Below is the light curve of this cataclysmic variable named TCP J21040470+4631129 based on the contribution of many astronomers, including myself, for the last two years. It shows rapid and short period outbursts occurring when significant material is lost by the secondary star. 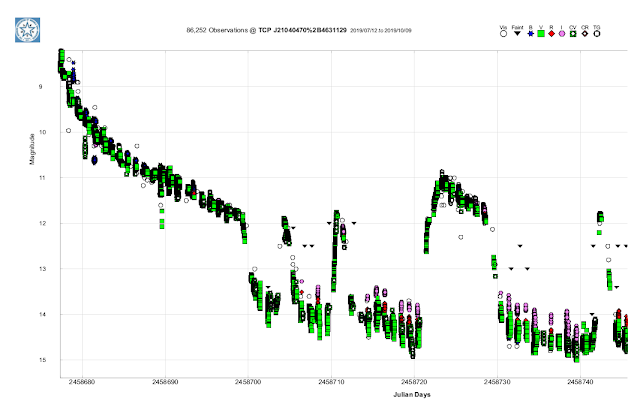 Below are the details of this system.
https://www.aavso.org/vsx/index.php?view=detail.top&oid=838181
Posted by Dr Charles Galdies on Wednesday, October 09, 2019 0 comments

The last issue of the scientific journal - the Minor Planet Bulletin (46, 2019) has two days ago published our work on the calculation of the rotational period of four rotation periods of main-belt asteroids 917 Lyka, 5706 Hevelius, 1989 CA and 8073 Johnharmon.

These calculations were made ont he basis of photometric observations carried out from the three observatories located here in Malta and one in the United States. Znith Observatory employed a 0.20-m Schmidt-Cassegrain equipped with a Moravian G2-1600 CCD camera at 1x1 binning, whilst Flarestar Observatory utilised the same CCD model coupled with a 0.25-m SCT telescope at 1x1 binning. Antares Observatory used an SBIG STL-11000 CCD camera at 2x2 binning attached to a 0.25-m SCT telescope. The asteroid 5706 Hevelius was observed from Sierra Remote Observatory at Auberry CA (USA) that utilised a 0.48-0 RC telescope coupled with an Apogee U42 CCD camera, at a pixel scale of 0.74 arcseconds/pixel.

The entire work can be found here.
Posted by Dr Charles Galdies on Sunday, July 07, 2019 0 comments

The lunar dome site in Hortensius is one of my favourite region to study. It is found near the 7 km crater Hortensius in Mare Insularum. The area presents six very interesting domes considered by many as typical examples of lunar mare domes.  Their shape is generally broad, convex and semicircular with a low topographic relief. For some reason, these domes bear no specific names other than Greek letters (Phi, Tau, Sigma, Omega, and two smaller domes that are not named).


The evolution of the Hortensius domes is still poorly understood. The formation of mare domes understood to be caused by eruptions of more viscous and more silicic lava than normal mare basalts. These domes probably formed during the later stages of volcanism on the Moon, characterized at the time by a decreased rate of lava extrusion and comparably low temperature eruptions. Due to the low relief of the Hortensius domes, it is difficult to determine their exact dimensions using normal photogeologic techniques, such as shadow measurements.

I am pleased to announce the publication of the first discovery of an eclipsing binary star system from Malta in the peer-reviewed Open European Journal of Variable Stars.

The discovery of this binary star system was made by Stephen M Brincat. Stephen, Winston Grech and myself have then carried out photometric studies on this star system to update its orbital details by observing it over a period of two whole years. This research has allowed us to derive other characteristics of this eclipsing binary star system.  Below is a link to the full scientific version of this announcement.

Labels: Variable Stars
Older Posts Home
Subscribe to: Posts (Atom)
Welcome to Znith Astronomy Observatory located in Malta. I use this blog to document the natural beauty of our universe as seen from my observatory. I hope this site will be a source of inspiration for you to reach closer to the wonders of the universe. Clear skies!
"Imagination will often carry us to worlds that never were, but without it we go nowhere"
- Carl Sagan