Lunar crater Arzachel is another magnificent feature to sketch at the telescope eyepiece. It is clear in its hexagonal structure and a favourite telescopic subject for advanced amateur astronomers.  I spent a bit of time scanning the lunar surface before deciding to focus on this crater. To the north of this crater is the larger and more conspicuous Alphonsus.

Crater Arzachel is some 66 miles in diameter. The bright interior includes a large and rugged central mountain (which rises 1.5 kilometers above the floor), some smaller hills, a deep crater accompanied by smaller carters to its north and south, and a very interesting winding rille to the East of the central peak, which at the time of sketching was close to the shadow cast by the eastern terraced wall. This rille system, known as Rimae Arzachel, runs from the northern wall to the southeast rim. In my sketch I tried to capture the dramatic shadow patterns on the eastern high terraced wall.

The entire rim has a detailed interior which proved to be a challenge to sketch. Below is an image from my archive of the same crater dated 8th February 2014. 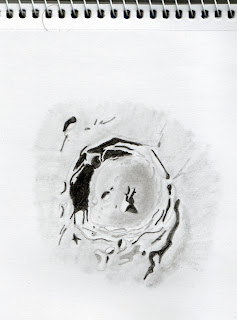 Check out another interesting sketch of the same crater here.