First observation of Jupiter for this year, imaged through an 889 nm filter. 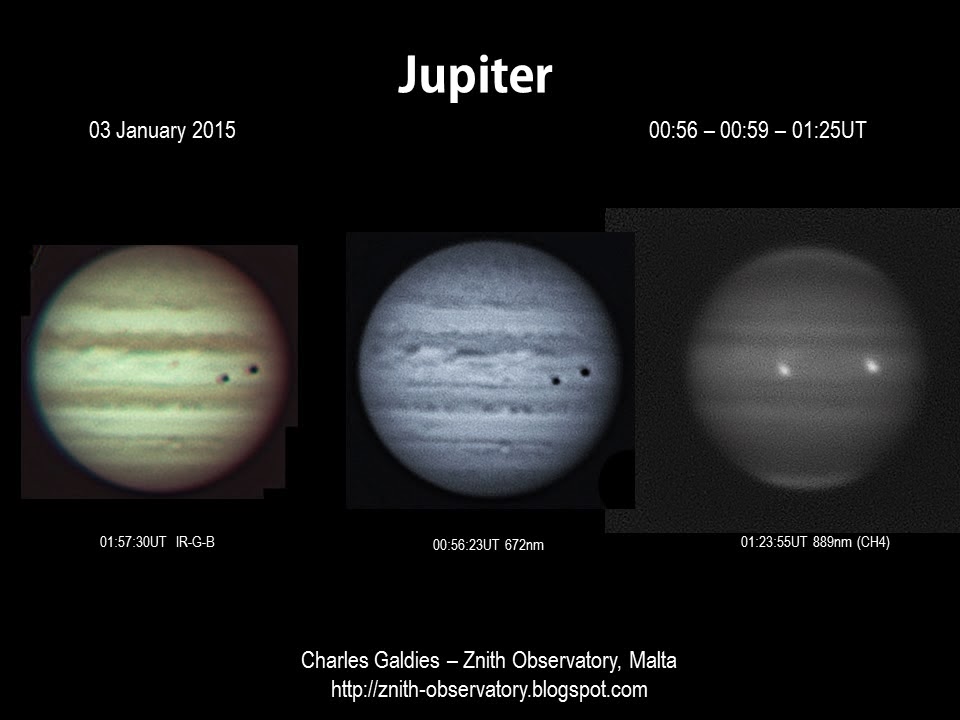 The night of January 2nd permitted a decent observation of the night sky, although the atmosphere was still turbulent following the influence of a static low pressure system was over Malta during the previous days. At around 02:30 am local time on January 3rd, the temperature was already 8degC and allowed limited manoeuvrability even under the sheltered dome.

Tonight's target was Jupiter, which at the time already reached an altitude of around 65 degrees. The sky was transparent but lacked the desired stability.

Tonight I wanted to test out the new methane band filter working at 889nm. The filter glass is darker and thicker than the RGB set and at f25, the image through the ZWO ASI200M camera was faint. In order to get a decent image through the 889nm filter I had to change to f11, which resulted in a much brighter, but smaller image. The image produced above is the result of image stacking for a total of 3 minutes, compared to 40 seconds for the IR-G-B image composites. Other observers using the same 889nm filter extend their imaging to a total of 6 minutes in order to bring out the desired contrasting features of Jupiter's clouds.

The IR-G-B image shown above is a conventional image produced using the RGB merge. The IR image brings out more subtle detail, even though the weather conditions were not ideal, as can be seen from the lack of clarity of such detail.

The image produced using the methane filter presents some interesting features. Images taken at this wavelength are  in black and white since there is no colour in the traditional sense at 889nm. Subtle features in the upper right image taken through the 889nm filter include:

1. clouds containing methane scatter the sunlight back away from the planet. Certain features appear more contrasting and easier to capture changing events.

2. Io and Europa are shown as very bright spots, but not their shadows. The Jovian moons are highly reflective and are not absorbed at 889nm

3. There are 2 subtle light areas in the Following part of Jupiter.

4. The  poles are also reflective.

The methane 889nm near infrared filter came to prominence among the amateur astronomy community as this was among those filters incorporated into the NASA Voyager spacecraft, in the NASA Hubble Space Telescope Wide-Field Planetary Camera (WFPC2), in the Space Telescope Imaging Spectrograph (STIS), and in the Cassini CIRS. These instruments have produced amazing details of the cloud structures on Jupiter and details of its Red Spot.