Foley (Kent, UK) saw the west wall dull and strongly colored. Moore (Sussex, UK) saw the wall as normal. However Cameron points out that Foley (Kent, UK) is a lot more Blue/UV sensitive than Moore. Moseley (Covington, UK) at 22:10 UT noticed a brightening on the East wall and at 01:10-01:25 UT suspected that the interior had a weak yellow-green cast to it. Cook (Frimley, UK) states that orange color was within the interior crater, but green beyond the east rim at the 9 O'clock and the south east corner to floor blue/mauve beyond the northern rim NW/WSW. Foley states that orange and blue/mauve might be spurious color, but green one cannot get this way. Cameron suggests chromatic aberrations as a possibility but thinks that the observers concerned were experienced enough to recognize this if it were the cause. Cameron 2006 catalog extension ID=239 and weight=0. Moore used a 15?" reflector and Foley used a 12" reflector. Moseley experienced II seeing and good transparency. Cook had III seeing and also good transparency. The ALPO/BAA weight=1.

During my observation I therefore imaged Aristarchus under similar illumination conditions to what the crater would have looked like when Peter Foley et al submitted the above report.

Results:
As shown in my image below, part of the visible floor of Aristarchus has a pale blue tint. However, most conspicuous blue color is found on the western part of the inner wall. This blue coloration also extends on the outside of Aristarchus, specifically in the Southwestern direction towards Herodotus, northwest in the region between Vallis Schroter and Aristarchus. An evident hint of blue color is also visible in the neighborhood of Vaisala crater to the North northwest. 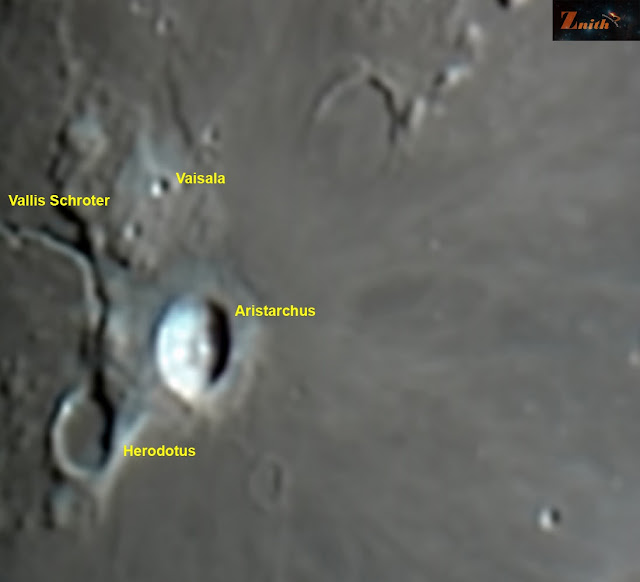 Conclusion:
After receiving my report, Tony Cook (BAA/ALPO LTP Coordinator) reported that the image agrees with Foley’s comment, i.e., that it was strongly colored. He checked for spectral dispersion in the image, but couldn't find much evidence for this on crater edges by flipping between red and blue channels. No orange can be seen inside the crater, as was noted back in 1984 by Cook, nor green beyond the east wall, though a tiny amount of blue is found, that one might consider to be turquoise.

He concludes that my report raises a few more questions than answers. Some new higher resolution colour images are needed to help resolve the repeatability issue over which colors are real at this stage in the illumination.

Cook concludes by raising this LTP ALPO/BAA-weight to 2 to encourage additional observation of this LTP at the proper illumination conditions.
Posted by Dr Charles Galdies on Sunday, August 04, 2013