WALTER - An appropriate name for an immense lunar crater.

The observatory was opened on April 18 at 22:35 local time. Tonight's targets were a number of lunar craters and a close up of Saturn's polar hexagon. 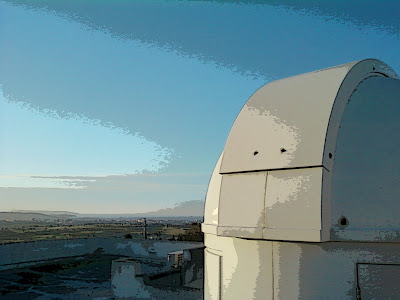 This session was devoted to the testing of a new planetary camera - the DMK31AF03, which is a firewire  camera having a CCD Sony array of 1024x768 pixel array at a maximum of 30 frames per second.

I slewed the telescope to the moon, specifically to the crater Walter. This crater is a walled plain crater some 140km in diameter. It is roughly 3.9 billion years old with exceptional formation.

Its steep, high terraced walls support many craters.  Its immense floor is flat with Walter E to the West and a group of craters whose Walter A to the North-East. In the image, craterlets and lines of crests can be noted. This image consists of the best stacking representative (90%) out of a total of 1000 images.


During this session, other lunar targets were taken at f/25, including:
Rima Hyginus
Vallis Alpes
Montes Alpes

The Observing session was terminated on April 19th at 0130 local time.
Posted by Dr Charles Galdies on Saturday, April 20, 2013