Jupiter, M35-M36 and the Sunflower Galaxy

The observatory was opened on Tuesday, 2 April 2013 at 2130 local time. Wind was on the increase (with strong winds expected tomorrow by midday). Thin clouds were present and moving from the north west.

At 2150 LT, viewed Jupiter using 25mm celestron eyepiece. Ganymede and Io were close together on one side of Jupiter, while Europa and Callisto were much separated from each other on the other side.

I decided to slew to M35 and M36 in the constellations of Gemini and Auriga respectively. These beautiful open clusters are a joy to view through a Plossl eyepiece. M35 is much more open than M36, and brighter. M36 is a tighter, yet open cluster and slightly fainter. 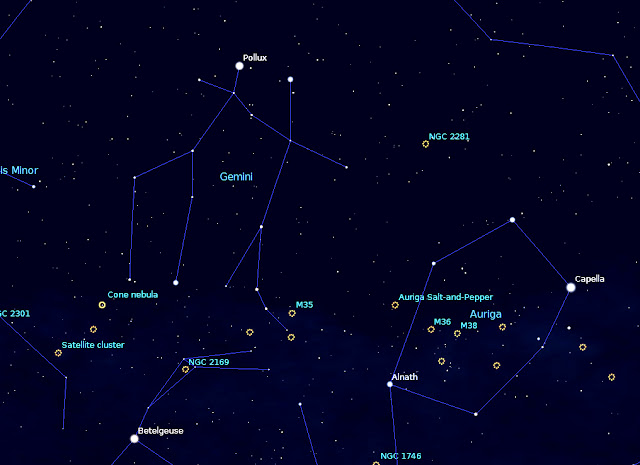 The poor clarity of the sky still enabled the detection of galaxies with magnitudes as high as 8.2-8.6. I slewed the scope onto the sunflower galaxy or M63 in Canis Venatici. Its magnitude is as low as 8.6, yet elusively visible through the 25mm Plossl eyepiece as a faint glow, with a hint of speckling under averted vision, as I tried to show in my sketch below.

I slewed the scope onto M81 and M82. The views were not as spectacular as during my last observations of these doublets. I spent around 10 minutes viewing the starburst galaxy under averted vision with the 25mm eyepiece. The central dark streak was barely visible.

The observation session was terminated at 2335 LT because of extensive cloud coverage.
Posted by Dr Charles Galdies on Wednesday, April 03, 2013