Check out this and other observations made on the same day:

On the early hours of August 4th, astronomical seeing was moderate to good. The image on CCD was relatively stable. Venus appeared brighter at a lower altitude.

Jupiter now presents a wealth of detail. The North Equatorial Belt (NEB) is very dynamic, with a colour ranging from red (at the planet's extremities) to pale orange (in the central parts). This band represents a very chaotic and dynamic pattern, made more evident using the narrow IR band pass filter at 742nm.

Based on the above images taken during the early hours, the width of the entire NEB on Jupiter's surface is 15,005 km (measured at CM). In comparison, the reddish North Temperate Belt (NTB) measured 4,150 km. 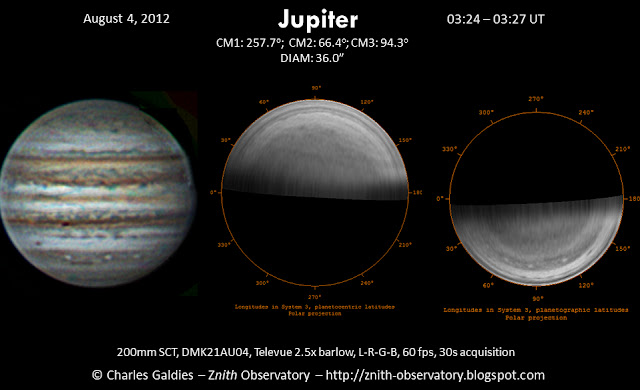 Observers from Southeast Asia are reporting that the South Equatorial Belt (SEB) is progressively narrowing. From the above images, the SEB was measured to be around 14,513 km (measured at CM).

From the above IR image, the South Temperate Belt (STB) is seen fragmented along the latitudinal plane.

I searched my archive for a past analysis of Jovian surface features at more or less similar longitude. Below is a comparative analysis showing the difference in the dynamics of the surface features during an 11-month interval. Calculations show that the NEB has in fact increased by 4,604 km in width, while the SEB decreased by almost the same amount. Interestingly, the equatorial belt was not visible in 2011. 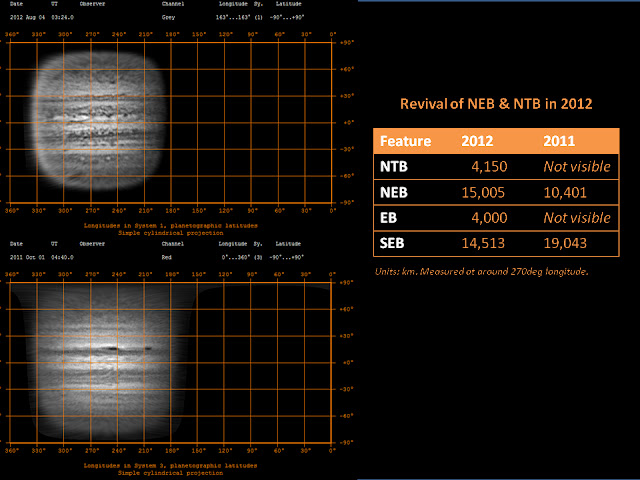 Comments on this blog are welcome.
Posted by Dr Charles Galdies on Monday, August 06, 2012