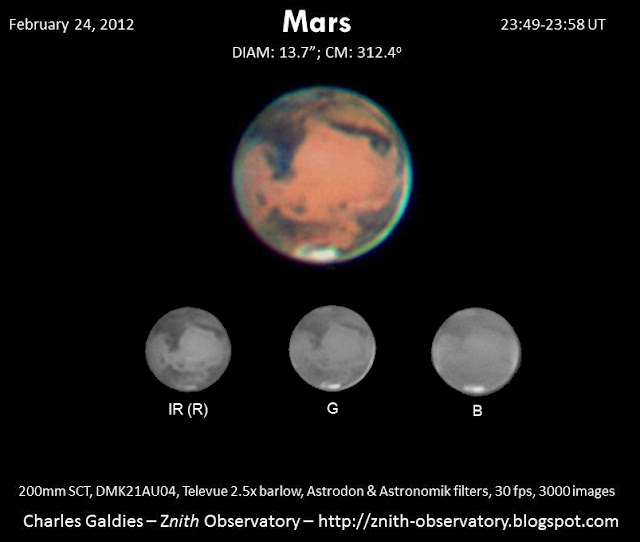 This is my second Mars observation session this month, taking the opportunity of a good clear night.

During this session I used a slightly higher gain to improve the image contrast. This resulted in a considerably improved final R(IR)GB composite. In addition I replaced the R channel with the IR channel, since the latter  always gives a better image definition and contrast than the normal R image.

The RGB composite shows a very interesting albedo composition. Syrtis major is seen as dark blue compared to the neighbouring Iapygia region, which has a reddish-brown hue. Hellas region is brighter and bluish in colour. The complex structure of Syrtis major together with the small protuberance of Moeris Lacus is very impressive. The indentation pattern of Sinus Sabaeus is very prominent especially at Sinus Meridiani.

The isolated Alcyonius Nodus next to S. major tip is very prominent. On the opposite site of S. major is Utopia which is lighter than S. major region. Ismenius lacus is subtle but visible.

A bluish haze is seen over Chrysae and Elysium region. Aeria region is very bright, although slight processing of the Blue channel gives a light blue signal between 0 degrees and +20 degrees in latitude, and stretching from Chrysae to Elysium region.

The thin blue-green border could be an imaging artifact, but certainly not related to the final RGB overlapping, since this feature is seen in the green channel.

This effects is seen in other images taken by other planetary imagers such as Christophe Pellier.

An interesting surface feature is visible almost cutting the polar cap in half, which is possibly due to retreating ice sheets. This feature is most visible in the Green channel.

Comments on this blog are welcome.
Posted by Dr Charles Galdies on Sunday, February 26, 2012