A tribute to the great Posidonius 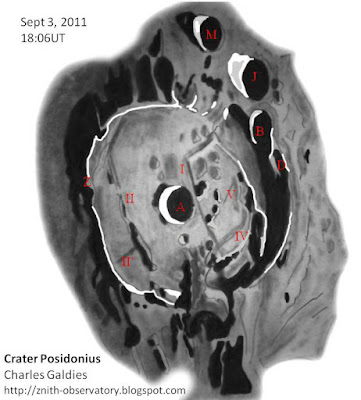 Posidonius is around 95 km in diameter and is located on the western edge of Mare Serenitatis. It has low and narrow western walls which rapidly thin out and end in a distinct break (Z). On the outer surface underneath the narrow walls are little hills. The eastern walls are broad.

To the southwest of the central crater A is a small round crater, while to the northeast are numerous hills and small craters. Located on the northeast wall are the deep craters B and D

The interior surface of Posidonius shows complex features. Particularly striking at a low sun elevation is the extended long cleft situated in the eastern portion of the Posidonius’ floor. Its eastern side is rather narrow, steep and highly reflective. 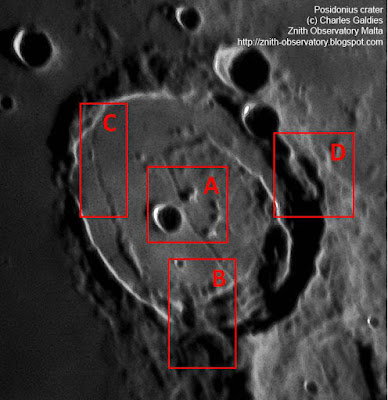 I took this image on September 3rd at around 1800UT. It is made up of a stack of 4954 images taken using DMK camera attached to C8 f/25. Seeing conditions were moderate to good.

IC Capture software was used to capture the video file which was then processed using registax 6 followed by slight processing using GIMP.

A close study of sectors A, B, C and D follows:

The remains of an inner ring which has been filled with lava is evident to the right of crater A.

Part of the relic of this inner ring features a twin peak which according to Clark this feature is resolvable as two peaks when the seeing is around 1.5” arc median or less. 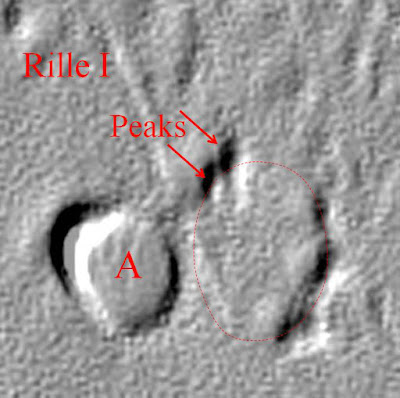 The image on the left is an inverted subset of sector A. The twin peaks have been clearly resolved suggesting good atmospheric conditions. The circular ring outline in red refers to the remains of the inner ring. Rille I is seen passing between the ring fragment and A.

Shown in the main image above along the north-south orientation is the fine rille crossing Posidonius (I). Other fine rills are seen (II, III, IV and V). An unclassified hereby denoted as cleft “IIprime” seems to originate from rille II which then diverts westward to cut through part of the western rampart. 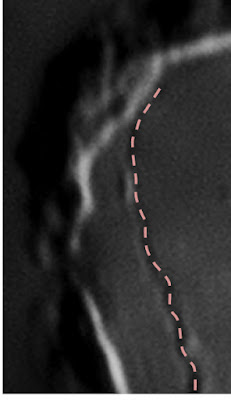 The subset shown on the left follows the sinuous Posidonius rille II which approaches the northern wall almost at an angle of 60 degrees and which then turns and runs parallel to the wall towards the east.

Better atmospheric conditions would resolve this interesting rille into a sinuous formation. Images from the Lunar Reconnaisance Orbiter show it as a remarkable feature which has formed from turbulent and highly viscous lava flow at high temperature able to erode the underlying surface. In turbulent fluid flows, eddies and vortices result in the twists and turns seen in this and other rille formation. 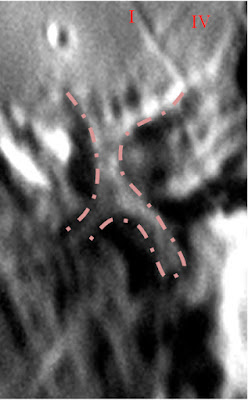 To the southwest of Posidonius is a large, interesting complex formation. The CCD image seems to show a connection which ‘bridges’ the interior with the exterior part towards crater Charconac in the form of a winding mountain ridge.

The subset image on the left shows this feature as a sort of large uphill mountainous bridge stretching outwards towards the exterior.

Another interesting area arises from the prevalent shadows at the time of imaging this crater at 1806UT, specifically on part of the Eastern wall. The subset image below shows part of the eastern wall having a major shadow embedded within itself, suggesting an extended sloping upward wall with a large elongated crevice in between. 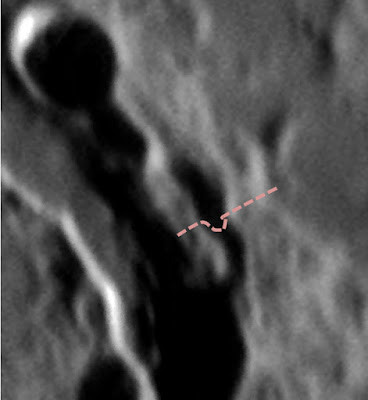