An obscure 'spider' in Catharina P

Catharina, together with Theophilus and Cyrillus forms part of a prominent trio on the northwest side of Mare Nectaris.

Catharina is the largest of the three great formations: a ringed crater with an irregular outline, extending more than 100kms. The wall is rather narrow and low on the northwest but rises to more than double the height on its northeastern side. This side of the wall is heavily impacted by several smaller craters. Little terracing on the inner wall is evident, and the outer wall sections are heavily eroded. The floor is relatively flat but rough, with the remains of smaller craters and hills. No central peaks are visible. 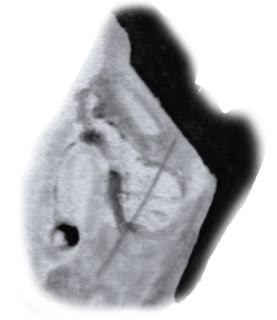 The most remarkable features of the crater are (1) the large, narrow-ringed Catharina P occupying a third of the floor of Imbrian origin, and (2) a large ring-plain on the S. side.

An interesting and delicate formation on the east side of Catharina P has been nicknamed by Haslet as Catharina's spider.  His 'personal' sketch can be seen at this link which certainly merits a re-visit. This barely 10km-wide feature is not visible in the Moon-Light Atlas nor in Neison's (1876).

High resolution images show it as a formation of a pair of small plateaus next to each other. The image on the left by Wes Higgins (http://www.lpod.org/?m=20060817) shows it to be a very shallow formation crossed by a  fine chain of craters traversing it from the NE  direction and extending towards the southern eroded wall of Catharina P. This image was taken on July 15, 2006 using an 18" reflector, Infinity 2-1M camera, 15fps, stack of 325 frames. [capture time unavailable].


On August 5th, I photographed this un-commonly documented 'spider' formation (below). The low sun angle brought into view the shallow plateau illuminating it's slightly elevated level from the floor of Catharina P. 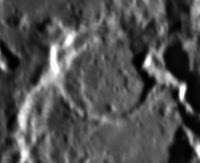 It is interesting to note that in  Higgin's image the sun angle is illuminating the 'spider' from the opposite side to that shown in my image. Relatively speaking, the shadows of small features (craterlets and hills) in the floor of Catharina P in both images seem to have more or less the same depth but are in opposite directions. One can assume that the sun angle was more or less similar during image capture. Therefore a comparison between the two images could bring some preliminary information on the elevation and slope of this plateau.

If this assumption is correct, then the fact that the shadow cast by the formation on its western side is more evident than on its eastern side could lead to the conclusion that this plateau may be sloping upwards towards the southwestern side of Catharina P. But further investigation is needed.

An  interesting feature tied to this plateau is the very fine crater chain which cuts through it and extends towards the Southwest. This is indeed a subtle feature and I wouldn't be surprised that it is missed out from many lunar photographs. Lunar observers rarely report on this formation.

It so happens that my image is the very first lunar photo I captured in my life, meaning that my digital processing is still very rudimentary. At the same time, I cannot help but noticing the subtle hint of this fine crater chain cutting transversely Catharina's spider.
Posted by Dr Charles Galdies on Thursday, August 25, 2011