UPDATED: Zooming in on Theophilus 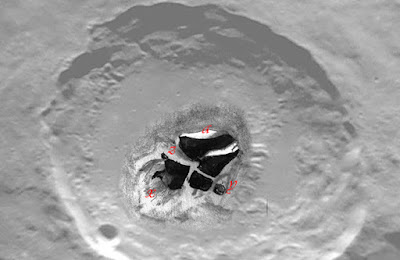 
Animation of the central area of Theophilus taken from LROC data.

On February 9th I spent around an hour examining the central detail of Theophilus. This circular crater is around 100 km in diameter and forms a remarkable trio with Cyrillus and Catharina.

The most striking feature of this crater is the magnificent bright central mountain which I sketched and superimposed on a photo of Theophilus to show its proportion as well as the level of detail observed.

This mountainous feature was seen to be composed of distinct masses (around 4) surmounted by lofty peaks, one of which is documented to be around 6,000 feet above the floor, and covers an area of at least 300 square miles.

I have annotated the four peaks of this mountain:

The reflected light from Region (a) was strong and translucent except for a small part at the edge which suggests a slightly sloping feature.

Region (z) reflected less light. High power magnification suggests this area as sloping into a valley-like feature, making this region decreasing in brightness as one goes away from peak (z)

Region (x) showed a very interesting texture under high power, which originated from one of the four summit peaks and gradually sloped down ending into an area of extensive mountain debris. This effect gradually increased the reflected light starting from the shadowed summit peak to a maximum at the crater floor.

Region (y) was seen as the resultant shadow of a fourth peak which was seen extending outwards.

Except for a distinct crater on the S.E. quarter, this mountainous feature was the only object of interest within Theophilus.

Below is a scan of the original sketch without superimposition. 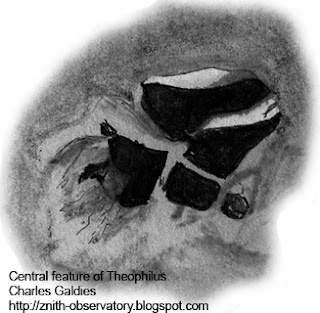