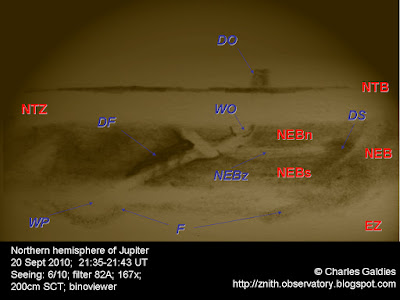 Tonite (20 Sept '10), Jupiter passed 368 million miles from Earth, its closest approach since 1963. At this distance the Jovian disc offered a lot of detail. The poor atmospheric seeing did not deter the detection of numerous irregularities (under averted vision) in the subtle colours and interfaces between the light-colored zones and the much darker belts.

The Equatorial Zone (EZ)
Faint greyish festoons (F) were seen connected to the boundary of the NEBs and extended into the EZ. White plumes (WP) were also detected in the EZ.

The North Equatorial Belt (NEB)
Large white spots and elongated filaments were visible in the NEB. At the forward edge, the NEB was evidently broken by a NEBz into a NEBn and NEBs.

The sketch shows a complex arrangements of white filaments or gaps along the NEB’s central meridian (WF) associated with a white oval (WO) situated along the NEBn. These filaments seemed to be connected to the fainter NEBz at the forward edge.

A dark spot (DS) was seen on the NEBz at the forward edge which was connected to a greyish festoon in the EZ.

A conspicious dark filament (DF) or condensation/streak resting along a white filament was seen on NEB along the preceeding side of the central meridian.

Lighter areas were seen close to the limb on the preceeding edge of the jovian disc.

The North Temperate Belt (NTB)
The NTB region is also included in the sketch. Some irregularity in the intensity was noticed along the belt.  A large ?dark oval (DO) was seen in the North Temperate Zone (NTZ) touching the NTB close to the central meridian on the forward side.
Posted by Dr Charles Galdies on Wednesday, September 22, 2010