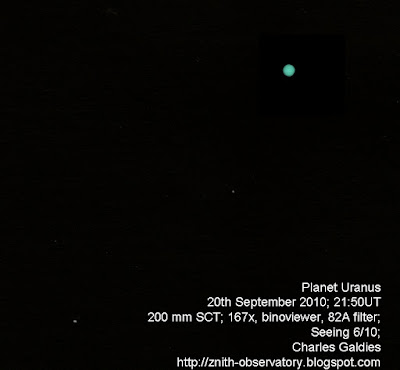 At the moment Jupiter is not exactly all alone. Uranus is not far away from its big brother. During my observation on the night of the 20th September both planets were separated by less than 1 and 1/2 degrees.

According to Greek mythology Uranus, or Father Sky, is personified as the son and husband of Gaia - or Mother Earth. Uranus and Gaia were ancestors of most of the Greek gods.

Uranus’ disk is very tiny in comparison with Jupiter, showing a weak light bluish-green pastel colour. Through the 200cm SCT telescope Uranus is undoubtedly a disk and not a glowing point of light. No surface details were detectable. I tried to locate it with the naked eye but was impossible because of light pollution over that sector of the sky.

Check out this link to photographic glimpse of Jupiter and Uranus on September 20th taken by Jimmy Eubanks using a similar 200cm SCT.
Posted by Dr Charles Galdies on Sunday, September 26, 2010