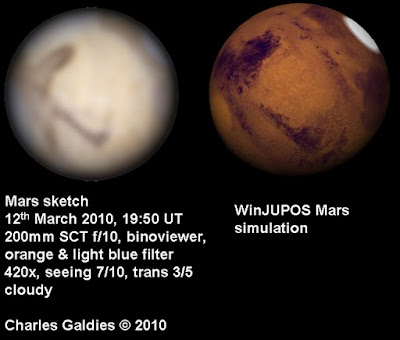 Some evenings ago I took the opportunity of the short break in clouds to test out the binoviewer I purchased recently. The view was amazing and the binocular setup offered a very relaxing observation of the subject. Using both eyes, the image is seen brighter and clearer, and permits longer viewing times.

I experimented using two different filters attached to the two eyepieces - orange (#21) on the left and light blue (#82A) on the right eyepiece. The blending of an orange and light blue image brought in a several coloured albedo features.

Hellas region was seen light blue and well defined next to Mare Serpentis. The Libya area was seen lighter than Arabia situated on the other side of Syrtis Major. The albedo of Syrtis Major region was seen irregular and clumped. The area under Sinus Sabeaus was seen in lighter yellow colour. Mare Erythraeum was evident as a dark feature on the following edge. I tried to put all this observation detail in my sketch shown above.

I strongly recommend the use of binocular viewers and combination of different colour filters for planetary visual observations.

This colour sketch is my first attempt to produce a coloured Mars sketch.
Posted by Dr Charles Galdies on Monday, March 15, 2010