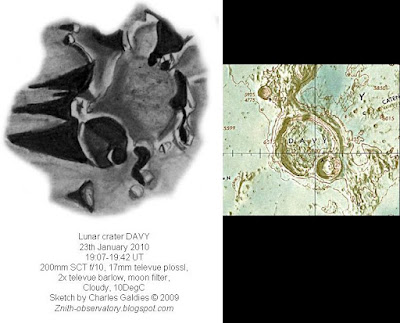 Davy was very prominent tonight. The small lunar crater is located on the eastern edge of the Mare Nubium.
This crater covers the remains of the bigger satellite crater 'Davy Y' to the east, which contains a crater chain designated as Catena Davy. This catena was not visible tonight possible due to the higher sun angle at the time. I had another opportunity some months ago to identify and sketch this catena. The floor of Davy Y appeared to be rather smooth with no visible features.
The outer rim of Davy was conspicuous and reflective. The interior was in semi-darkness, so interior features were not visible. The perimeter is somewhat polygonal in shape, and the southeast rim is overlayed by the Davy A crater. Davy A is rather deep and its interior was also in darkness. No central peaks were visible in its interior.
An interesting feature is the tapering shadows casted by the western wall of Davy, craterlet B and part of the walls of Davy Y.
Sketching Davy within the overall context of its surrounding neighbourhood was quite hard and took more than the usual sketching time.
Posted by Dr Charles Galdies on Friday, January 29, 2010