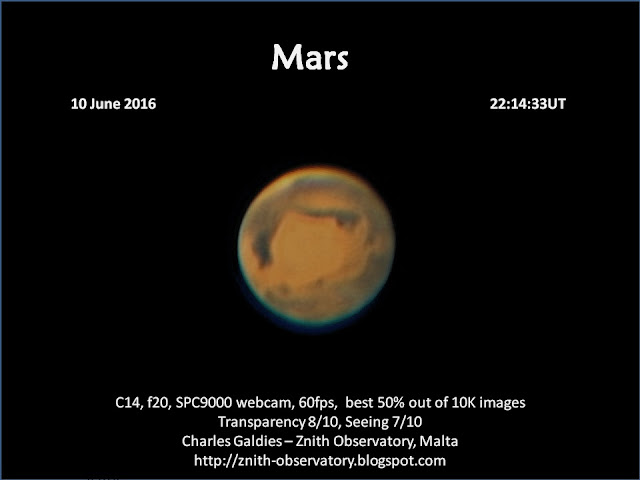 This is my first imaging of Mars this season, taking the opportunity of a good clear night. Previous observations for this apparition season included the sketching the Martian surface using different colour filters. Hopefully, I plan to upload these sketches once I complete the full observation of the Martian surface.

The RGB image shows a very interesting albedo composition. Syrtis major is seen as dark blue compared to the neighbouring Iapygia region, which has a reddish-brown hue. Hellas region is brighter but lacks the usual bluish hue. Perhaps this is due to oversampling of red signal by the webcam.

The complex structure of Syrtis major together with the small protuberance of Moeris Lacus are very conspicuous. The indentation pattern of Sinus Sabaeus is very prominent especially at Sinus Meridiani, and shows the good atmospheric conditions present at the time of image acquisition.

The isolated Alcyonius Nodus next to S. major tip is very prominent. On the opposite site of S. major is Utopia which is lighter than S. major region. Ismenius lacus is subtle but visible.

The desolate expanse of Arabia region is prominent, and has a lighter colour when compared to its slightly darker borders in areas adjacent to S. Sabaeus and S. Major. Here I am referring to the regions of Aeria and Edom in particular.

The south polar cap is not visible.
Posted by Dr Charles Galdies on Saturday, June 11, 2016