On ghosts and ancient greek astronomers. 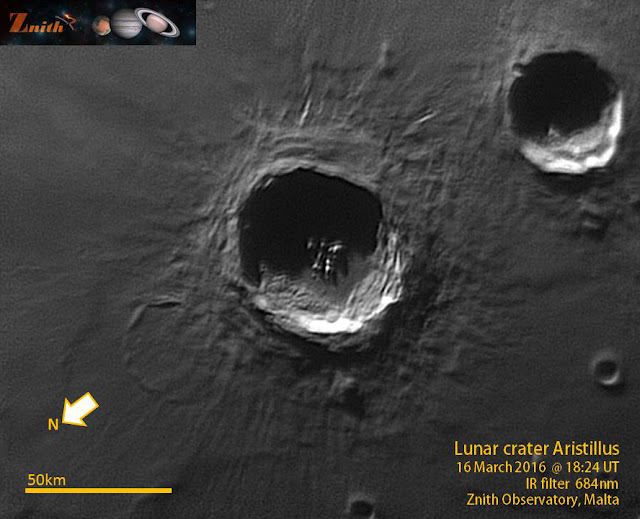 This prominent lunar impact crater, named Aristillus, which measures some 52.7 km across is located at SE of Mare Imbrium (specifically at Lat: 33.87 & Lon: 0.188). To the south of this crater is 37.6 km Autolycus crater , while to the SW is the magnificent, 85 km Archimedes crater. To the NW is the elusive Cassini crater.

The lunar crater is named after the ancient Greek astronomer Arystillus on the basis that it is located near the Moon's meridian and at a lunar latitude roughly similar to the terrestrial latitude of Alexandria (31° 11' 53" N). Arystillus is known for his first true star catalog where each star is identified by numerical measurements of their positions.

The above image taken yesterday evening in not so ideal conditions (partly cloudy and breezy) shows that the sunlit part of the rim of Aristillus is wide. This part of the inner wall is definitely terraced, and descends to a relatively rough interior. In the middle of the crater is a set of three clustered peaks, which rise to a height of some 512 m. The crater also clearly shows that irregular ramparts ejecta against a relatively smoother surface of the surrounding mare.

A ghost-crater remnant at the northern outer ramparts is also visible in the image. Ghost-craters are usually detected as faint circular rim of craters that have been covered by molten rock, testifying to a young moon.