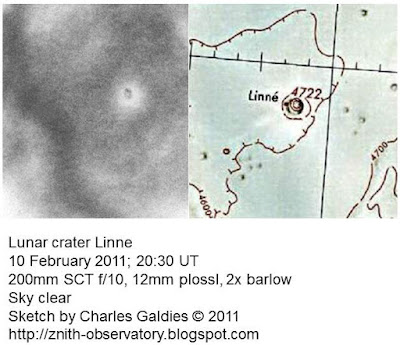 In spite of its simple outline, sketching this craterlet was quite intriguing. According to official lunar atlases, it is just 2.5km in diameter which is at the limit of resolution of the 8” SCT at 333x magnification.

The craterlet has a circular formation with steep slopes and rounded floor and blanketed by bright ejecta.

Linne’ craterlet has in the past been a controversial feature. Attention on this crater was focused on the possibility of the release of gas “outgassing” from the lunar interior. This interest dates way back since 1840 when varied sketches were produced by Schmidt. Recent imaging analysis suggest the existence of a slight haze over the craterlet which might be either dust or gas, or both. The hypothesis has been put forward of a very low density of gas leaking from the craterlet which is ionized by sunlight, making it luminous and increases its scattering effect on light passing through it, especially on the shorter wavelengths.
Posted by Dr Charles Galdies on Tuesday, February 15, 2011