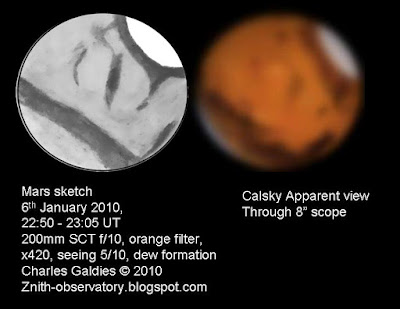 Mars is getting closer now and it is amazing how much detail can be seen from even a small telescope with medium seeing conditions.
During my short observation the first albedo feature which struck me most was that dark fringe of Utopia and its elongated feature pointing towards the centre of ths disc. Utopia always contrasts well against the adjacent whitish polar cap. Also evident during moments of good seeing was Alcyonus Nodus but was rather elusive at times.
The next obvious feature was seen on the opposite side of the disc corresponding to the dark albedo strip of Mare Tyrrhenum underneath which Eridiana was seen as a somewhat lighter area. Unlike in the 2003 Mars apparition, I could not detected any fine detail of this very interesting M. Tyrrhenum.
Next I surveyed the neighbourhood of A. Nodus, in which I detected another subtle albedo feature corresponding to the location of Sympallus Lacus. I could hint that between A. Nodus and S. Lacus there was a circular, lighter area, which interestingly enough is also represented in the Calsky apparent view. Could this be part of Elysium?
During good visibility, Utopia seemed to be closely touching S. Lacus, and in my sketch I slightly connected the two.
At almost the end of the sketching period I started noticing a dark feature at the edge of the disc which the following morning my mars map showed it to be the dark Syrtis Major. It was quite a well defined dark and elongated feature.
The following morning I checked my sketch against Calsky's apparent view as seen through an 8 inch scope (selection for other apertures also provided) and I was really happy to note the good accuracy of the sketch.
Below is the original albedo and intensity sketch I made next to the telescope. The Mars map needs to be rotated horizontally. 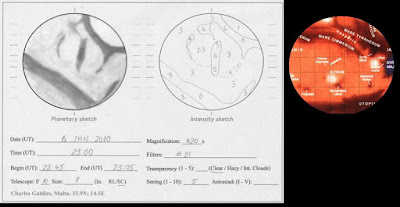